Roses are red, mud is brown, ‘round here we party with the radio up and the tailgate down - Earl Dibbles Jnr.

We all like to have a good time, we like to enjoy ourselves, let our hair down, and party whenever we can.

While some of us like to have too much of a good time, the rest of us are just happy to spend whatever downtime we can with our friends at the game, the racetrack, or if a band we like is rolling through town, at a concert.

And showing up early and hanging out after the game has finished and the show is over is almost as much fun as the event itself.

The number of lifelong friends we’ve made while grilling and chatting and socializing around the tailgate of our truck is almost beyond measure. 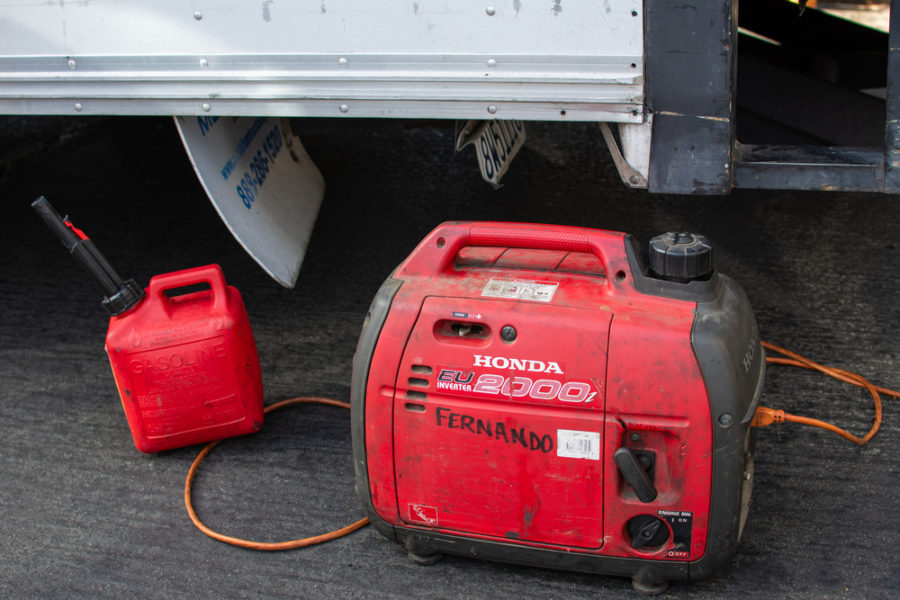 Being avid tailgaters, we know what the party needs to start swinging and that no-one ever really gets into their stride if the music isn’t turned all the way up to ten, the cooler isn’t doing its job properly and the grill isn’t working overtime.

But for all those things to be in perfect alignment, you need power and if you want to make the most out of every tailgating get together, you’re going to need more than enough power to keep your party pumping.

That’s why we, as experienced tailgaters, have come up with a list of the best tailgating generators that no serious tailgater should ever leave home without.

Champion has decades of power generating experience and their American made generators have been helping to fuel homes, campsites, and RV’s for years.

A generating giant in the field of electricity, Champion makes the sort of products that’ll fire your tailgating shindig up and keep it going long after the sun has put on his nightcap on and made a beeline for the land of nod.

Their three thousand four hundred watt inverter generator is a ninety-nine-pound workhouse that’s powered by a one hundred and ninety-two cubic centimeter engine that’ll run on either gasoline or propane.

If you’re using gas, it’ll give you seven and half hours worth of stable., clean power and if you’re going to run it on propane, it’ll nearly double the amount of electricity it’ll make and will supply you with fourteen and half hours of power from a twenty-pound propane cylinder.

And it’s quiet too, making just fifty-nine decibels of noise when it’s operating at peak efficiency. That’s quieter than the average conversation, and even if it is a little too loud, you can just turn the stereo up with the power that it makes and let the Champion’s noise just fade into the background chatter.

Uncomplicated and undemanding, the Champion is easy to set-up and simple to operate thanks to its straightforward control panel and if you lock it into economy mode, then it will just keep on ticking until you’re ready to head home or it runs out of gas.

Wen has been helping to keep the lights on since nineteen fifty-one.

Whether you’re preparing for natural disasters, want a simple home-back up, or want to fuel your camping and tailgating extravaganzas, Wen makes a legion of generators that’ll provide all of the power you’ll need.

And the 56200i, which is a bit of a mouthful, is one of their hidden tailgating friendly gems.

From a single tank of gasoline the 56200i can provide up to nine and a half hours worth of stable, clean electricity that won’t damage or incapacitate your more sensitive juice-hungry equipment, so the party will never come to an unexpected stop when the Wen is in charge.

At its peak, it’ll supply two thousand watts and in typical running mode will have one thousand three hundred watts on hand at any given moment, which provides more than enough power to make sure that your tailgating soiree goes off without a bang.

Weighing in at just fifty pounds, and churning out just fifty-two decibels of volume when it’s pushed to maximum capacity, the 56200i could have been purpose made for tailgating, and we’re convinced that it had at least one tailgater on its design team.

Light and small enough to find a comfortable corner in any truck bed, the 56200i is the heartbeat that’ll keep any tailgating party’s blood flowing.

We’re motor fanatics, so whenever we see the name Briggs & Stratton we’re drawn to it like bees to a honeypot.

The foremost manufacturer of small air-cooled engines in America, Briggs & Stratton are pioneers in the field of power production and have probably forgotten more about making generators than most companies will learn in a lifetime of manufacturing.

The one hundred and eleven cubic centimeter engine that lies at the core of this super quiet inverter generator produces two thousand two hundred watts of power at peak and has one thousand seven hundred on hand at any, providing that its motor is on, given time.

It’ll furnish you with eight hours worth of stable, clean electricity, that you can use to power everything from your tablet (it even has a USB outlet that you can connect your smartphone to) to your grill, from a single, one gallon, tank of gas.

Made to be mobile, this fifty two-pound generator has an easy carry system that simplifies its portability and makes it easy to throw it in the back of your truck and hit the open road with.

And when it does kick in to save the day and power your party, it’ll never exceed fifty-nine decibels, so it’ll just become another one of the many voices having a good time.

Since they were founded in nineteen fifty-nine, Generac has only had one thing on their mind; power.

They were the first company to engineer and develop affordable home generators and they’ve been tweaking and honing their designs ever since to bring you the power you need to make your life better.

Able to produce ten and a half hours of electricity from one, full tank of gasoline, the Truepower technology that it uses supplies all of the stable, clean power that you’ll require to power the greatest tailgating get-togethers that you’ve ever thrown.

Weighing in at just forty-six pounds, the 2200i is devastatingly simple to operate and can be switched on and off with a twist of a dial and slipped into eco-mode, for maximum fuel and power efficiency, at the touch of a button.

It’s been made to let you make the most of the outdoor life and puts power right at the front of tailgating fun.

No, you’re not alone, we hadn’t heard of Ryobi either.

But just because you don’t know anything about a brand, it doesn’t mean that they’re not incredibly good at what they do, and with a bit of due diligence and after a little digging we discover that Ryobi is every bit as well regarded and respected in their home country of Japan, as Champion and Briggs & Stratton are here.

Using an eighty cubic centimeter engine to generate two thousand three hundred watts at its peak and one thousand eight hundred when running normally, the Ryobi will produce just under ten and half hours worth of power on a single tank of gasoline.

Engineered with an “Idle-Down” feature that’s Ryobi’s version of eco-mode, when engaged, it’ll automatically make sure that efficiency and electricity take center stage and the generator will make the most out of every drop of fuel and supply you with all of the power that you’ll need at the same time.

Bluetooth enabled, you’ll be able to control and monitor the Ryobi from your smartphone and increase and decrease the power it supplies as well as being able to switch it on and off and switch it into ‘Idle-Down’.

The future of power generation just came calling, it’s probably wise to invite it to your tailgating party.

An American phenomenon, tailgate parties, or tailgating, are social gatherings that happen around the open tailgate of a truck or SUV. They usually involve music, good conversation, barbecued and grilled food, and more than a few beers.

Most tailgate parties happen before and after football, ice hockey and baseball games, NASCAR races, and concerts and are held in the parking lots of the venues that these events are held in.  The people who attend, hold and have popularised these events are known as ‘tailgaters.

What Is A Portable Generator?

A portable generator, or engine generator, is a machine that uses an internal engine to generate power and electricity. It does this by transferring the energy that the engine makes to an alternator, which then spins and converts that energy into electricity.

Often used as back-up generators for houses, primary generators for construction sites, and as a way to generate electricity on camping trips and during tailgating parties, portable generators can be powered by either gasoline or propane.

Smaller, more compact portable generators are also called inverter generators, which, like their larger counterparts, use an engine to create electricity.

Which Tailgating Generator Is The Right One For Me?

The primary things you need to consider when thinking about buying a tailgating friendly generator are the weight of the generator and can your truck cope with (and can you physically move said generator into your truck) said weight, the amount of electricity it will generate versus the amount of power that you’ll need and the budget that you have to spend on your generator.

Once you have definitive answers to those questions, you’ll be in a much more advantageous position to make your decision. That said, if you wanted our opinion, we’d always suggest that you invest your time and money in the same generator that we use when we go tailgating, the Generac 2200i.

We know that they have a customer service issue, but you shouldn’t let that distract you from the fact that the 2200i is a lightweight, packed with technology generator that loves being the center of attention while outdoors and is an efficient way to generate all the power that your tailgating parties will ever need.

Who knows? Maybe we’ll see you after a game one day and if we do, we’ll happily have a burger and beer with you.