If it weren’t for electricity, we’d all be watching television by candlelight - George Gobel

When Benjamin Franklin finally proved the existence of electricity in seventeen fifty-two, he almost certainly had no idea that his discovery would change the world.

As a species, we are entirely reliant, and dependent, on electricity for almost all of our daily needs.

It lies at the heart of our leisure time, fuels our working lives, and helps to shape every facet of our existence from food production to transport and travel.

Humanity has thrived due to the flight of a balloon and a metal key during a lightning storm, and we have never been more indebted to anyone than we are to the founding father whose innate curiosity created the future. 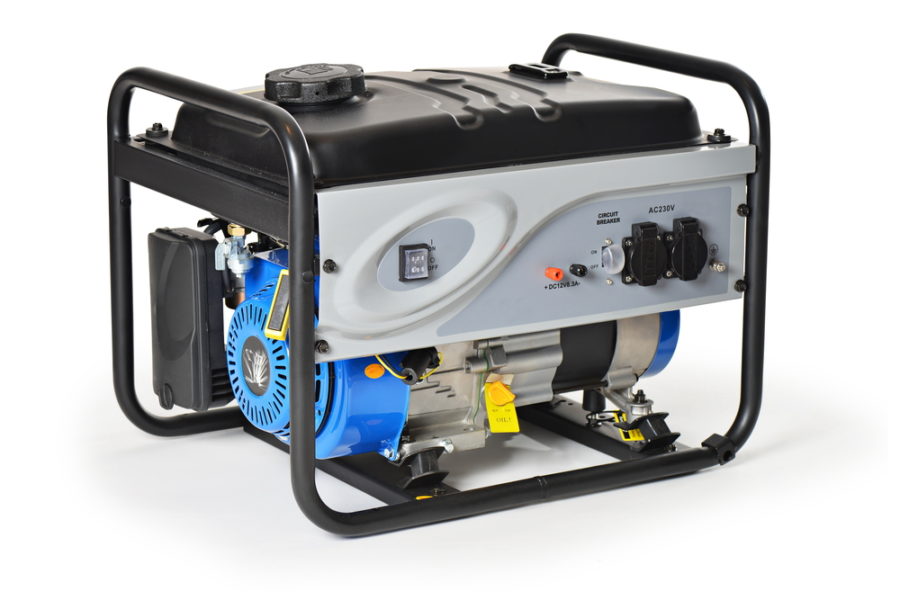 The problem with being dependent on something is that when it’s taken away, things tend to fall apart.

When power companies succumb to blackouts and grid outages and we’re confronted with a loss of power and our homes and everything in them go dark, we’re left struggling to find a solution to a surprisingly common problem.

That’s why every home should have a back-up generator so that life doesn’t have to come to a grinding halt when your power supply does.

And that’s why we found five of the best generators made by one of the best manufacturers of the portable generator, Westinghouse, so that when the worst does happen, you'll be ready and prepared to let a generator kick and make all the power that you’ll need until the grid comes back online.

It’s time to power up… 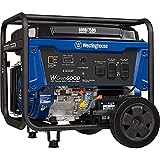 Versatility and power creation are two of the most important features that any generator can possess and the WGen9500DF has both in abundance.

A dual fuel generator that’s as comfortable being fuelled by propane as it is gasoline, it’s a heavy-duty machine that’ll double up as both a home-based, and job site ready generator.

Powered by a heavy-duty, four-stroke four hundred and twenty-seven cubic centimeter Westinghouse engine that’ll fire into life with the remote from its key fob or at the push of a button, this monster-sized generator is a one size fits all electricity-generating giant that’ll always be ready to go whenever you need it.

It’ll make nearly twelve hours worth of power on a single tank of gasoline and generate the same from a twenty-pound propane cylinder, meaning you can ride out any blackout in comfort or create enough electricity to run your work site for a day, from the moment the 9500F fires up until it’s tank runs dry.

Dependable, reliable, and strong, this generator will help you to weather any power-based crisis.

We don’t all need Goliath to step up to the plate when the grid goes down, sometimes we just need David to cover, and fill in, for the power company for a while.

And Westinghouse’s David is their super-quiet Inverter Generator that’ll plug any household gap until whatever power emergency you’ve found yourself caught up in, finally comes to an end.

Weighing in at just forty-two pounds, or the equivalent of an upset and belligerent pre-schooler, the WH2200 (lets’ abbreviate its full name and make things simpler for everyone) will make up to thirteen hours worth of electricity on a single one and a half gallon tank of gasoline.

It’s super-quiet run technology means that even when it’s cranking out two thousand two hundred watts at peak operation, at just fifty-two decibels it’s still quieter than an average conversation and won’t overpower the volume of any necessary modern household appliances (like television or an Xbox) that you’ll want to power with the stable spike free electricity it produces.

It may be small, but the WH2200 will be ready to roll when it matters and is, as Westinghouse so rightly says an “ideal home back-up generator”.

When the lines go down and the power fails, for whatever reason, the WH2200 be waiting to help you to get the lights back on and carry on with your life. 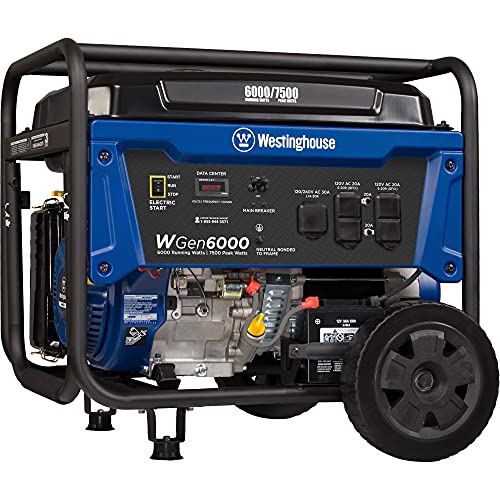 When you don’t want to go all out and you don’t want to go too small, and need a generator that’s going to cater for all of your center field electrical needs and maybe fill in here and there on whatever job site you need a power-based hand on, there’s no better unit to sign on the dotted line with than the WGen6000.

A middle-weight power making champion, as soon as the bell rings, the WGen6000 will be ready to get stuck in and let the sparks fly.

It’s four hundred and twenty cubic centimeter engine will generate seven thousand five hundred peak watts and six thousand running watts and will serve up thirteen hours worth of current on a solitary tank of gasoline.

Featuring single switch start-up and full digital display so you’ll always know exactly how much juice it has left, the WGen6000 is a plug and play generator that comes with a simple to follow users manual and all of the tools that you’ll need to set it up, maintain it and ensure that it remains in first-class condition.

Built to last, the WGen6000 has a low oil shutdown system that means, should you for any reason leave it running and forget about it, it’ll turn itself off when it’s oil level gets too low.

It doesn’t just protect you from the effects of blackouts and grid failure, it’s also more than capable of protecting itself from accidental damage.

It’s time to step back into the world of Westinghouse’s versatile portable inverter generators that are primarily designed to be a household back-up with their remarkably efficient, game-changing small power plant, the iGen2200.

This is Westinghouse’s next-generation inverter generator and one of their, and deservedly so, best selling models.

Even when it’s pumping out two thousand two hundred watts of power at peak efficiency (it usually runs at around one thousand eight hundred), it’ll only make fifty-two decibels of noise while producing up to twelve hours worth of electricity on a single tank of gasoline.

Weighing in at just forty-six pounds, this small, but incredibly dependable generator will keep your entire household running when the rest of your neighborhood goes dark.

Size isn’t everything and what the iGen2200 lacks in build, it more than makes up for with the amount of juice it generates.

Featuring two standard household outputs and two USB ports that you can use to charge your phone and power your smart technology, this inverter generator will produce a steady stream of spike resistant, safe and stable electricity, so you’ll never have to worry about it harming or damaging any of your household appliances.

It’s been made to keep you and your home safe during, and throughout, any electrical catastrophe. 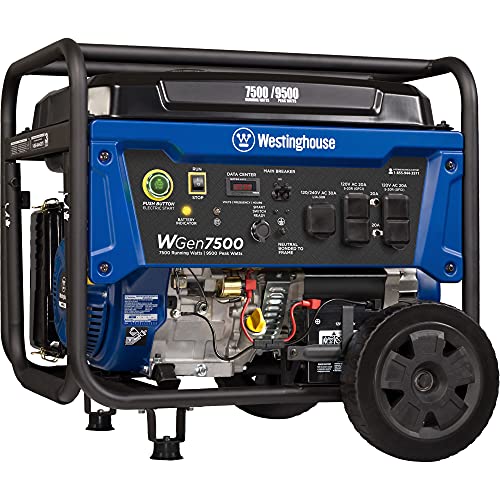 Lastly, but by no means least, is Westinghouse’s Deputy Big Dog portable generator that’s been engineered and designed to deal with all of your household power woes and on-site electrical emergencies with a flick of a switch.

Or, as the WGen7500 has embraced the world of technology, a touch of a button on its key fob that features remote activation.

Able to generate up to eleven hours of electricity on a single tank of fuel, the WGen7500 produces 9500 watts of power at peak operation and runs with steady seven thousand five hundred watts.

Another of Westinghouse’s Plug and Play generators, the WGen7500 is made to be easy to maintain and comes with a tool kit to help you set it up and keep it running, and is even simpler to use and operate.

Fuel the WGen7500 up, press start, and plug whatever you want to power into it and you’ll be ready to go.

The WGen7500 is one of Westinghouse's big guns and it’s been built to cope with crises, deal with disasters, and provide all of the on-site job back-up generation that you’ll ever need.

It may not be the prettiest generator you’ll ever lay your eyes on, but who needs beauty when the 7500 makes the kind of power that’ll keep your world turning no matter what happens.

Founded by George Westinghouse in Pittsburgh in eighteen eighty-six, Westinghouse was responsible for creating and developing a lot of America’s early electrical infrastructure.

Having moved into the generation of Nuclear Energy in the latter half of the twentieth century and after buying CBS and the rights to broadcast the NFL in the nineteen nineties, Westinghouse’s business portfolio is now almost as broad as the imagination of its founder George Westinghouse.

Even though it has diversified in the last half-century, Westinghouse’s primary field of expertise is still electrical power and generation, which is why it is still seen as being one of the foremost manufacturers of portable electrical generators.

What Is A Portable Electrical Generator?

Portable generators produce electricity by using a gasoline or propane-fueled engine to power an alternator that converts the energy the engine creates into electricity.

Smaller portable generators often work on the inverter principle, which uses a two-step process to convert the energy created by their internal engines into electricity.

Which Westinghouse Generator Is The Right One For Me?

That depends entirely on your budget and how much power you want your generator to make.

If you’re in the market for a simple household back-up generator that you can maybe use to take on camping trips as well, then the only Westinghouse product that you should really be looking at is the iGen2200 as it’ll do everything that you could ever ask of it, and will do so efficiently and quietly.

However, if you’re looking for a generator that provides a little more juice and will fuel both your home and worksite and you have a fairly decent budget, then you need to look no further than the WGen7500 which will make more than enough power to satisfy the needs of even the most fervent devotee of electricity.