Whether you're looking to power your home or business with a generator, or looking to take one on the road with you in your RV, it's important to know what they can safely power.

Overloading a generator can both damage the generator itself, and the products you have plugged into it. This is why you need to know how much your generator can handle.

Today, we'll be talking about what you can power with a 2000 watt generator. 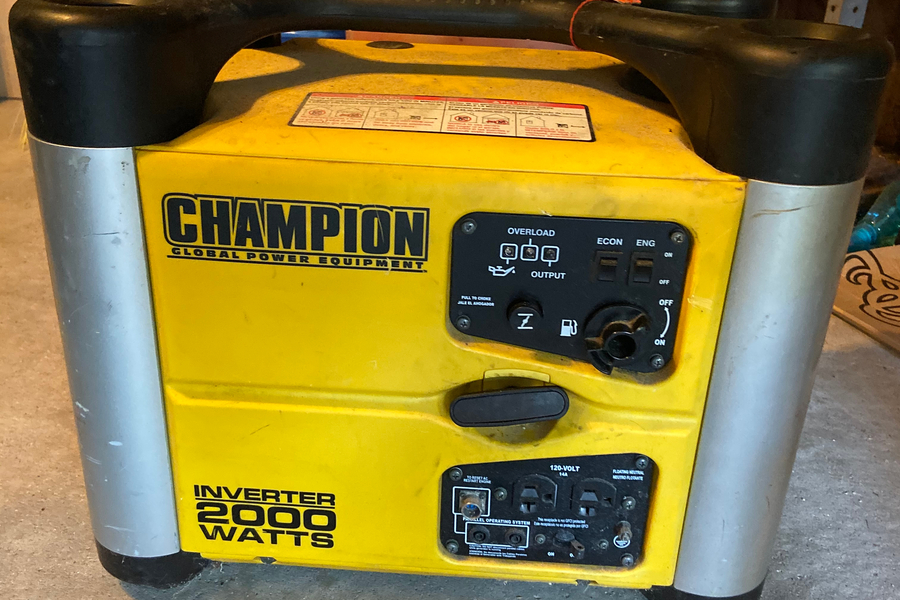 What Can a 2000 watt Generator Produce?

If you think you may need a bigger generator, check out our articles on what 3500 watt, 5000 watt, and 7500 watt generators can power.

The average space heater runs on around 1500 watts, which fits comfortably into the range of a 2000 watt generator.

Space heaters like this are particularly useful in RVs during the cold winter months. Newer models are more efficient and will cope better whilst being run by a generator.

Here are some of our favorite space heaters: a slim tower heater, or, a box heater.

Handheld and cordless vacuum cleaners are great devices that can be run on a 2000 watt generator.

Handheld vacuum cleaners need up to 500 watts of power and are a great option for traveling with, as they have an impressive size to power ratio.

Cordless vacuum cleaners use around 1400 watts when charging. These models are easy to store and even easier to use.

You cannot use a plug-in vacuum cleaner when using a 2000 watt generator, as they on average need 3000 watts to power themselves during use.

Here are some of our favorite vacuum cleaners: handheld, or, cordless.

The average coffee maker runs on 750 watts, and the average espresso machine runs on 1250 watts.

There is the option to use either with a 2000 watt generator. These measurements do not include industrial-sized espresso machines.

Here are some of our favorite coffee options: coffee maker, or, espresso machine.

The power usage of toasters ranges from 800 - 1500 watts, depending on how much toast you want to make at once.

The most common power usage is 1200 watts. With this low power usage, they are a great appliance to install in your RV.

Here are some of our favorite toasters - retro look, or, smart toaster.

Compact microwaves use between 500 - 800 watts of power, traditional microwave ovens use up to 1800 watts.

These appliances are so versatile whilst using so little power that they have to be a must-pack for all trips.

Here are some of our favorite microwaves - option 1, or, option 2.

Modern fridge-freezers only use between 40 - 440 watts.

This will be very appealing to generator users as they use so little power that you can run them alongside other appliances.

Here are some of our favorite fridge-freezers: standing, or, trunk.

Mini grills run at roughly 1225 watts, this makes it a great alternative to ovens or grills that need around 3000 watts to function.

This number will vary depending on the brand used. But 1225 watts is the average number for a countertop grill.

Here are some of our favorite countertop grills - Hamilton, or, Cusimax.

A small dishwasher used about 1100 watts when running a wash cycle.

Most dishwashers come with gentler settings that will use less wattage. Using a dishwasher is much more energy-efficient than heating up tap water, through a boiler or kettle.

Here are some of our favorites - Countertop, or, fitted.

Slow cookers are a great option if you're trying to stick to a low watt lifestyle (by choice or necessity).

We're a huge advocate for slow cookers generally as they take all the hassle out of making good food.

Here are some of our favorites - Beginners, or, does it all

Whether you're using it for work, gaming, or streaming most of us don't travel anywhere without our laptop anymore. So it's important to know if you have the right generator to power one.

Thankfully, laptops run on a very low wattage - averaging at about 50 watts. This will go up if the laptop is using a lot of processor power (for example, when it runs a game).

Modern laptops are built to use as little power as possible so running one on a 2000 watt generator will be no problem.

Here are some of our favorites - HP, or, ASUS

This item has become utterly essential in all our lives over the last decade.

Thankfully, phones have developed a lot over the last few years and now only use 2-6 watts when charging. This is an item you can run off a generator without worrying about the whole thing shorting out.

Here are some of our favorites - Apple, or, Android

If you visit certain parts of the world in your RV then a TV will be a necessity to keep yourself entertained.

That being said, you don't normally run a TV on its own (we often run a channel box or satellite with our TV), so it is important to work out if you have enough power to run the different elements at the same time.

The good news is that TVs run at very low power levels. When on standby they use around 20 watts. A large 4k TV uses around 400 watts when displaying at its highest quality.

Here are some of our favorites - Sony, or, Samsung

If you're like us and unlucky enough to have hair so unruly that you have to travel with hair dyers and/or hair straighteners - then you'll probably want to know how easy they are to run off a 2000 watt generator.

We have some good news and some bad news.

Let's start with the good news. Hair straightens pretty consistently run on 75 watts. This is a great, low number that means you'll have no problem running then in conjunction with other items.

The bad news hair dryers aren't so consistent. Some hair dryers run at a lovely 800 watts, this is a great range for a 2000 watt generator.

Some run at 1800 watts, which means that you will probably have to unplug everything else to use this. And unfortunately, some hairdryers run at an even higher wattage.

If you want to use your hairdryer on a 2000 watt generator you will have to do some research into your specific model to check whether it is safe to use.

Here are some of our favorites - Hair Dryer, or, Hair Straightener

Running a game console is not as simple as plugging it in. There are many other power elements that go into playing a video game. This includes running the monitor and the controllers.

When a console is on standby it runs at about 90 watts (when it isn't updating), when playing games these consoles will use up to 310 watts (current data for the PS4 Pro).

Add to this, the power to run the controllers and a maximum of 400 watts to run a TV and you should still be able to power all of this on a 2000 watt generator.

Here are some of our favorites - Switch, or, Xbox

Nothing says 'it's summer' like turning on your window AC for the first time every year.