Having a backup generator is a great idea if you live in an area that’s likely to experience power outages at some point.

They’re also useful for those with an RV who enjoy weekends away but want to take their home comforts with them, as you can power your electric devices and use them to run your AC when you’re not hooked up to a power station.

Whatever your reason for having one, you’re probably going to want to know exactly what you can do with your generator before you buy it.

Maybe you already have a 3,500-watt generator and you just want to check how many appliances you can run at once.

Either way, this handy guide will answer the question, ‘what can you run on a 3,500-watt generator?’

What Does a Generator Do?

In technical terms? Generators use mechanical chemical energy and convert it to electric energy, which can then be used to power your appliances and devices.

They do this by harnessing the power of motion and using it to deliver electrical energy via a circuit, which forces the electrons from the original source to pass through.

In layman's terms, the purpose of a generator is to provide a backup source of power when you’re unable to connect to the main power supply, which is incredibly useful in a number of situations. 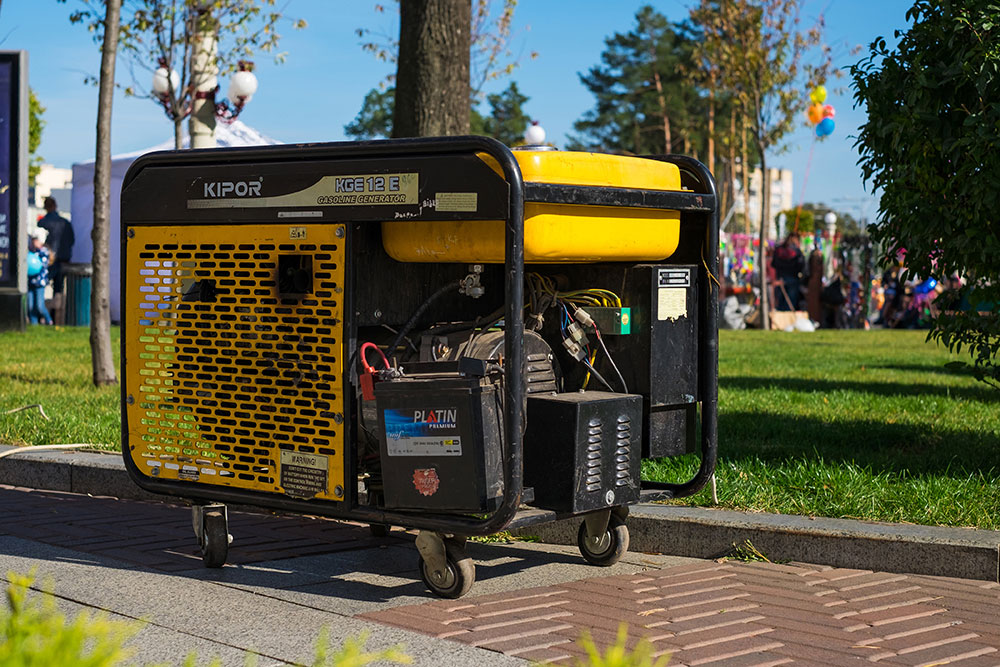 What’s The Difference Between Peak Power and Running Power?

One of the reasons that some people find choosing the right generator so confusing is because it can be tricky to differentiate between all the different wattage ratings there are to consider. No wonder it’s difficult to know what you can run on 3,500 watts!

There’s both the generator and the appliances to take into account, plus, you need to factor in the peak and running watts which are different things. They’re each important, as overestimating either one of them could lead to overloading your generator.

What are the peak and running power ratings? I hear you ask. It’s actually quite straightforward. Peak power is the number of watts your generator can deliver to start up your appliance, and can only be sustained for a limited amount of time at its peak before dropping back down.

Running power, which is also known as rated or continuous power, is how many watts your generator can supply to keep your appliances running for longer periods, and is typically less than the peak power watts.

What Home Appliances Can You Run?

Generators with 3,500 watts of power are generally one of the best choices for an external power source because you can run a couple of standard appliances at once.

If you’re planning on using your generator at home, you can keep the most critical elements of your household running even when there’s a blackout or an emergency power outage.

You won’t be able to run an entire household on this size generator, however. You’d need at least 5,000 or preferably 7,500 watts for you to keep this many applications in operation, especially for extended periods of time.

The first thing most people worry about when they experience a power outage is how they’ll power their refrigerator and freezers, as food doesn’t stay fresh for long when it’s not being properly stored.

This can lead to excessive waste, but luckily, with a 3,500-watt generator, you can run both your fridge and freezer. You’ll never have to choose between saving your salad or ice cream again, although we know which one would win out in this household…

You can also run small to medium size kitchen appliances, including a microwave, kettle, or coffee machine, so you can satisfy your caffeine cravings even during a blackout.

You shouldn’t have too many applications running at once, however, as you may overload the generator which can damage the engine.

You’ll have to check the wattage requirements on your appliances for complete accuracy, but here are some examples to give you an idea:

There are plenty of other applications around the home that would be able to operate on a 3,500-watt generator, in order to keep your household running smoothly while you wait for the main power to come back on.

Keep warm even in the absence of your home’s central heating system, because in the case of a power cut, a 3,500-watt generator is perfectly capable of running an electric heater.

If you have an electric blanket, throw that on too! Having a reliable heat source during a blackout is always a good idea, so it’s great that you can power one using your generator.

Less essential (although this depends on who you’re talking to) are appliances that allow you to keep up appearances, such as hairdryers, straighteners, curling tongs, and other non-hair related personal grooming equipment.

These can still be used when you need them most by simply powering up your generator, as 3,500 is more than enough for these appliances.

If you’re looking to do a little DIY around the home, you’ll be pleased to know that 3,500-watt generators are also capable of powering the majority of standard power tools, so losing power doesn’t have to put you behind schedule.

From drills to saws, your generator can run this equipment for relatively long periods of time while you’re working on your home project, though there are some limitations, such as how many people you can have using tools at once.

For example, they’re not the best choice if you’re planning to use your generator to operate tools on a construction site. Due to the wattage requirements for most power tools, you can’t run more than one or two at a time else you risk damaging the engine through overexertion.

What Can You Run in Your RV?

A 3,500-watt generator is a great investment if you own an RV as it's enough to run your mobile home on.

However, even though RVs are smaller than your homes, you can still end up having issues if you try to power too many different appliances at once.

Not everyone who escapes for a weekend away in their RV wants to be completely disconnected from the real world.

You can’t charge your small electrical devices when you’re not shored up to main power, so whether you need access to your work email or you want to keep up your regular posting on social media, a 3,500-watt generator will keep you online.

Everyone loves family games night, but monopoly can become monotonous if it’s your only source of entertainment. Why not try family film night, for a change?

With a 3,500-watt generator you can power your television and DVD player for an all-night movie marathon, just don’t forget to pack some popcorn!

What can you cook your popcorn on, I hear you ask? The same way you would at home! Just hook an electric stove or a microwave up to your generator, as 3,500 is plenty to run either of these kitchen appliances.

As much as everyone loves a campfire, navigating the campsite or clearing up outside your RV after dark is tricky if this is your only source of light.

The same thing goes for candles - they’re great for creating a romantic ambiance, but not so much at guiding you when you’re trying to find the toilet at night.

Well, there’ll be no more groping around for the last box of matches whenever you're not connected to the main power source, because you can continue to power your lamps and light bulbs with a 3,500-watt generator with ease.

From spotlights to night lights, your lighting system is another thing you can operate with a generator this size.

One of the most energy-consuming things you can run in your RV is the AC, which can initially require up to 3,500 watts of power for a standard 15,000 BTU air conditioning system, or potentially less if it’s a small RV. This would max out your entire generator’s capacity at first!

With 1,500 watts of running power, after the initial start-up, you’ll be left with 2,000 watts of power to run an additional smaller appliance, such as a kettle or hairdryer. You would only be able to have these plugged in for a few minutes, however, or up to 10 at a push.

You can also power smaller fans or heaters to boost your AC if you find your air conditioning system needs a little boost, as long as the total wattage being drawn from the generator is less than the 3,500-watt limit.

There’s often debate about which size generator is the best and what level of wattage your power unit should have, but sometimes other factors like budget or storage space are at play.

If that’s the case, you’ll be pleased to know that while 3,500-watt generators aren’t the absolute more powerful options on the market, they’re perfectly sufficient for running single appliances or a couple of small, essential devices.

We hope this handy guide to 3,500-watt generators has helped you realize the variety of appliances you can run on a generator with this power output, whilst also informing you of some of its limitations so you don’t end up damaging your unit through overexertion.

We’ve provided some examples of wattage requirements of some common appliances, but ultimately, the answer to the question, ‘what can you run on a 3,500-watt generator?’ depends on the specific type of appliances you’re planning on using.

You can always check what exactly you can run on your generator by reading the label on your appliances, as this will state the wattage they use.

Once you know this, you can total the wattage of each device and, as long as it doesn’t exceed the 3,500 watts your generator is capable of supplying, you won’t have to worry about overloading it.

One final thing to note is that 3,500-watt generators aren’t suitable for use over an extended period of time and should be a temporary measure only. Using your generator for too long can cause further power outages or damage it, and then it won’t run anything at all!