If you need a generator and know that you are going to need it to provide a lot of power, you are definitely best off choosing a 7,500 Watt generator.

These are some of the most powerful generators on the market and are mainly used as a backup generator for homes or to power tools on a building site.

A 7,500 Watt generator is powerful enough for the majority of tasks, but to determine if it is a good choice for you, you need to be aware of how much power you need.

Today we’ll take a look at some of the main uses for a 7500W generator, and the various appliances it can provide power to. 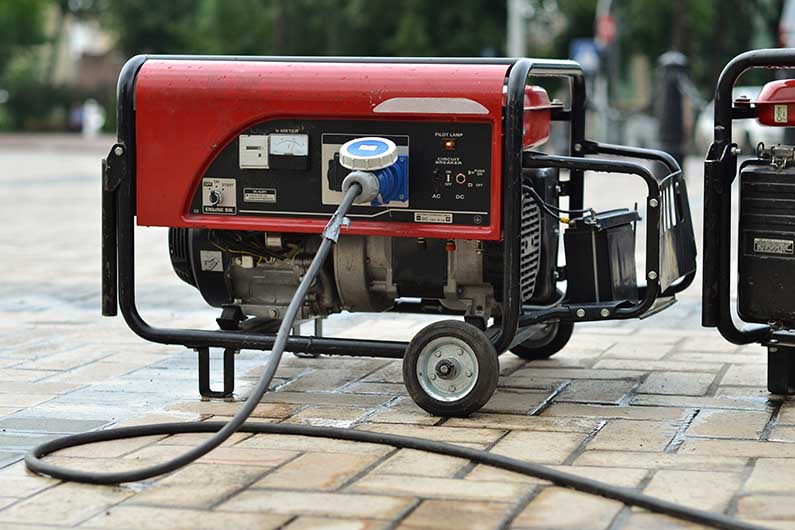 To fully understand what you can run on a 7,500 Watt generator, we must first understand exactly how the power in a generator works.

Whether you already own a generator, or you are simply investigating them before making a purchase, you will be aware that generators come with two different power ratings.

These are the surge power and the running power, and both measurements are completely different from one another.

Of the two measurements, the lower one will be the running power and this is a measurement of the power that the generator can continuously run at as long as it has a steady supply of fuel.

When you are adding up the different appliances that you want to be powered by the generator, it is vitally important that the total power draw from these devices is significantly less than the running power of the generator.

If the power draw matches or exceeds the running power of the generator it will cause an overload and potentially damage the generator.

On the surface, the surge power might seem pointless as it will not power any devices at this level of Watts for longer than a couple of seconds.

However, a lot of household appliances and power tools, both of which are regularly powered by generators, will require a higher amount of Watts on their original startup than they do when they are operating continuously.

That is why surge power is necessary in order to provide these appliances the high amount of power that they need on their original setup.

It is also worth noting that many generators will supply 2 different figures for both their running and their surge power.

This is because a lot of modern generators are designed with dual-fuel capability, allowing them to run on either gasoline or propane.

As these generators can be powered by 2 different types of fuel, they will perform differently depending on what fuel is currently in their tank.

In most cases, generators will perform significantly better on gasoline than on propane, so the higher set of numbers will be the performance of the car is powered by gasoline while the smaller amount is when it is powered by propane.

However, you should always check the specifications for your specific model of generator to check that the performance ratings are labeled correctly.

If you have any experience, you will be aware that a 7,500 Watt generator is an extremely powerful device.

In fact, a 7,500 Watt generator can provide more than enough power to run all the essential appliances in your home in the event of a power outage.

In some States where blackouts occur regularly, it is common for households to have a backup generator to supply electricity to their home during the outage and a 7,500 Watt generator is more than capable of doing this.

But a lot of household appliances won’t require a 7,500 Watt generator to power them as their running power is a lot smaller than this.

However, home air conditioning units and central heating systems are extremely heavy on running power so if you want to supply power to either of these systems, a 7,500 Watt generator might be the best choice.

Plus it is always better to have too much power available than not enough.

Although the majority of household appliances require less than 1,000 Watts to operate, it is surprising how quickly these numbers can add up.

Just look at your kitchen, by the time you add up all of the different cleaning and cooking appliances in your home, including microwave, toaster, coffee machine, washing machine, and dryer, you are already pushing 3,500 Watts and that’s without even taking surge power into account.

So it’s understandable why a 7,500 Watt generator might be a better investment than a smaller generator, especially if you are looking to power more than one device at once.

There are two main settings where you are likely to use a generator, at home or in a workplace setting.

As well as for backup electricity in your home, it is also very common for generators to be used on building sites.

So let’s take a look at these two very different scenarios and identify the different appliances you can supply power to from the generator.

In particular, the lighting system in your home is very power heavy. If you use incandescent bulbs these will draw roughly 60 Watts of power for every bulb, and even LED bulbs will still draw more than 12 Watts per bulb.

As well as air conditioning or heating systems, which we’ve already explained are heavy on power, another appliance that eats a lot of power is your refrigerator and freezer unit.

Considering that these are one of the main areas you will be concerned about in the event of a power outage they actually require on average 700 Watts of continuous power and a surge of 1,200 Watts making them one of the more hungry units in your home.

While these appliances added together will require a lot of running power, the majority of the other appliances in your home will not require that much.

When all of the essential appliances in your home are added together you will still, more than likely, have more than 2000 Watts of running power left.

Other than in a home, you will most likely see a 7,500 Watt generator in a building site. They are very common among building companies as these generators are powerful enough to supply electricity to multiple different power tools simultaneously.

The majority of smaller generators will be unable to power more than one power tool at any given time due to the sheer amount of surge power that is required to start a lot of these power tools.

For example, a portable air compressor, on average, requires only 1,600 Watts to operate, however, it requires a surge power of 4,500 Watts to startup which makes it difficult to power the air compressor with a generator which is smaller than 7,500 Watts.

This is why 7,500 Watt generators are so popular on-site because they can provide electricity to the most power-hungry of tools and still have enough left over to power a variety of others at the same time.

In short, a 7,500 Watt generator can run pretty much anything.

They are most commonly used as backup generators for homes or on building sites to power tools, but as long as the power draw of your appliance is less than 7,500 Watts, this generator will be able to run it.