There are two ways of RV camping.

There’s the old way, where if it gets hot, you swelter, because there’s no alternative.

And then there’s the new way, where your RV has an air conditioning unit, and you have a generator powerful enough to run it, keeping you cool in the heat. 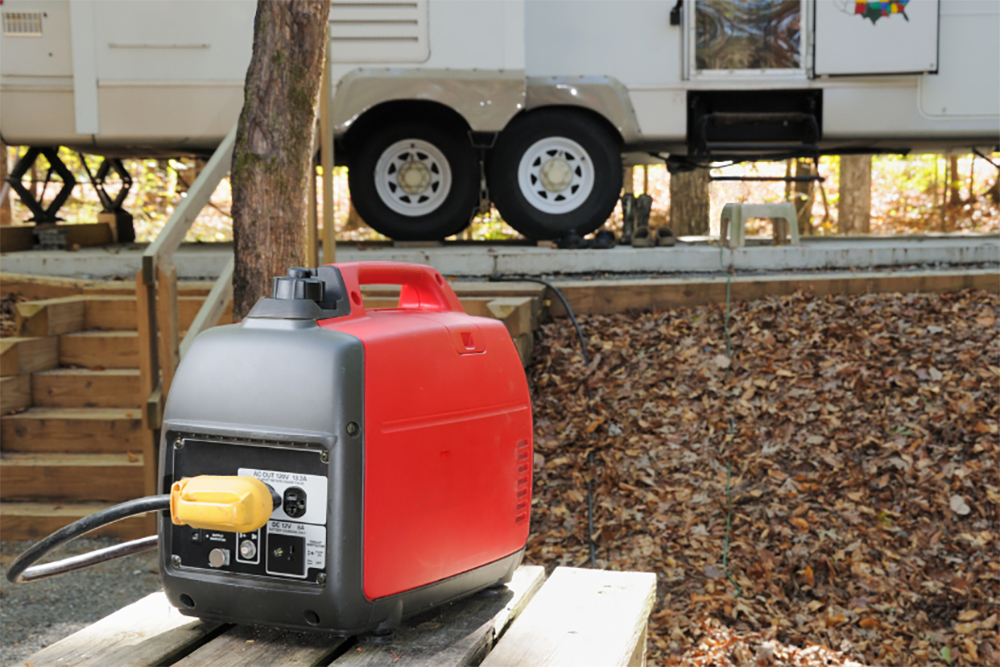 Everyone prefers the new way.

There’s a clue in the number, of course – 2000 watts is the peak power that the Honda puts out. Meanwhile, it produces 1600 watts of continuous power to keep your appliances running from hour to hour.

So, theoretically, if you can find an air conditioning unit that works within these parameters, then yes, you can power an RV air conditioner with the Honda 2000.

But that’s nothing like as easy as it sounds.

Because air conditioning units, along with refrigerators, are some of the most power-thirsty appliances you can put into your RV.

It’s probably a good idea to scale down your air-con dreams before we go much further. Understanding that you have a maximum of 2000 start-up watts and 1600 running watts to play with should give you some idea of where your air-con dreams need to be.

Even a fairly small air conditioning unit will process 10,000 BTUs. To reach that level, it’s likely to need to draw at least 2000 watts on start-up. That ‘at least’ is dangerous territory.

But if we assume that small air conditioning unit uses ‘only’ 2000 on start-up, it will likely take at least 700 watts of continuous power.

That’s within the parameters of your Honda 2000, so while the start-up watts are close to the edge of your Honda’s performance, the running power is a lot more comfortable for the generator.

Now, obviously, if you can find an air conditioning unit that takes less than 2000 watts for those first moments of start-up, and still runs less than 1600 watts of continuous power, you’re golden. The question then becomes how effective the air conditioner is at its fundamental job of cooling the air.

That’s a significant question, because the size of modern RVs tends to demand a generator that has at least 2000 watts, and more likely 4000 watts capacity.

It’s also important to understand that if you have an air conditioning unit that uses only 2000 watts on start-up, and then runs at something under the 1600 watts you have available, you may have to significantly limit your use of any other appliances while you’re running the air conditioner.

By a program of limitations, you can make sure that all the available energy generated by your Honda 2000 is available for the air conditioner.

Certainly as an absolute minimum, you’d need to make sure nothing else is plugged into the generator on start-up, so that the full 2000 watts of potential power from the Honda is available to meet the start-up needs of your air conditioner.

When you’re into steady running, you’ll need to understand how many watts each appliance draws before you plug it into the generator, because the last thing you want to do is push your generator beyond its tolerances.

But ultimately, the answer to this question is yes, but with conditions.

You can run an RV air conditioner off a Honda 2000, but you have to make sure that neither its peak watt draw on start-up, nor its running wattage draw, exceed the capabilities of the Honda 2000 to deliver.

As we’ve said, that’s perfectly possible to do, it just becomes a question of how effective the air conditioning unit will be.

A 10,000 BTU air conditioner is medium-small, and will push the start-up power draw requirements at least to the very limits of the Honda 2000’s capacity, though its running wattage will allow you to plug some other known-wattage appliances into the generator before it reaches the 1600 running watt threshold.

You can get RV air conditioners with significantly lower BTU thresholds than that, and they will be perfectly safe to run with a Honda 2000.

If you have a 5000 BTU RV air conditioner, you’ll need something in the region of 1100 peak watts at start-up, and an average running draw of between 300-450 watts.

Larger RVs will need air conditioners with larger BTU figures to effectively keep the air cool and do the job for which they exist.

Many larger RVs today take an air conditioner in the region of 14,500 BTUs of cooling power.

If we do the wattage math, that works out as a peak starting wattage of 3800, which is beyond the dreams of the Honda 2000 – almost doubling the potential peak need when you start up the air conditioner.

There are some sneaky tricks to get more certainty of power out of your Honda to run your AC. If you switch off any Eco mode on your generator, it lets you use the whole of the generator’s power towards the AC.

If you have an RV refrigerator, turn it to gas – there’s no benefit in trying to run both the AC and the refrigerator and the AC off a Honda 2000 simultaneously.

Start up just the fan on the air conditioner, and let it run up to speed. Then engage the compressor. This should give you a ‘staggered start,’ and reduce the likelihood of peak demand on start-up overpowering your Honda generator.

That way, by avoiding the potential peak draw point at start-up, you might be able to get a slightly more powerful AC to run with your Honda 2000.